MUMBAI, India -- Thousands of Buddhists gathered in Mumbai on Sunday to lay to rest part of the ashes and bones of Lord Buddha in a ceremony resurrected after almost 2000 years. 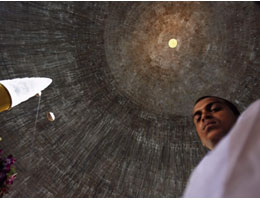 << A boy stands next to a crystal to be put up atop the dome above, as he attends a Buddhist ceremony in a newly constructed pagoda in Mumbai yesterday. Thousands of Buddhists gathered for the ceremony held to lay to rest part of the ashes and bones of Lord Buddha

Monks in flowing orange robes chanted hymns from scriptures as the remains were lowered into a shallow pit on top of a 90-ft high stone dome, as part of celebrations to mark the 2,550th anniversary of the spiritual leader's enlightenment.

Organisers of the ceremony said this was the first time in around 2,000 years that Buddha's mortal remains were being enshrined.

"The relics now kept in this magnificent pagoda came from an ancient dome discovered during an archaeological expedition in south India in early-1900s," Acharya S.N. Goenka told reporters.

After Buddha's death, his remains were divided and kept in eight separate domes built by his disciples across Asia.

They were later taken by Buddhist convert Indian emperor Asoka, who placed them in many smaller domes about 2000 years ago.

The remains being enshrined on Sunday were found in an ancient pagoda in southern India in 1920 and have been kept in a Buddhist monastery for over 85 years, before being handed over for enshrining.

Buddhists, some of whom came from other parts of the world, including the United States, Britain, Australia and Cambodia, sat in meditation inside the dome, which can accommodate 8,000 people, many looking up in the direction of the roof where the remains of their guru lay.

According to believers, the enshrined relics of their leader emit spiritual energy and vibrations which helps meditation.

The organisers said the newly-constructed dome was unique as it was not only the world's largest stone dome unsupported by pillars, but was built with millions of inter-locking stones using ancient architectural techniques.

"No cement, concrete or metal has been used. There are no pillars to support the dome which is 280 feet in diameter," said Subhash Chandra, a Buddhist and an Indian media baron.
Posted by cwango at 3:35 PM No comments: Links to this post

Posted by cwango at 12:36 AM No comments: Links to this post

His cage is exactly two Japanese inches high and one inch and a half wide: its tiny wooden door, turning upon a pivot, will scarcely admit the tip of my little finger. But he has plenty of room in that cage - room to walk, and jump, and fly, for he is so small that you must look very carefully through the brown-gauze sides of it in order to catch a glimpse of him. I have always to turn the cage round and round, several times, in a good light, before I can discover his whereabouts, and then I usually find him resting in one of the upper corners - clinging, upside down, to his ceiling of gauze.

Imagine a cricket about the size of an ordinary mosquito - with a pair of antennae much longer than his own body, and so fine that you can distinguish them only against the light. Kusa-Hibari, or 'Grass-Lark' is the Japanese name of him; and he is worth in the market exactly twelve cents: that is to say, very much more than his weight in gold. Twelve cents for such a gnat-like thing! ... By day he sleeps or meditates, except while occupied with the slice of fresh eggplant or cucumber which must be poked into his cage every morning... to keep him clean and well fed is somewhat troublesome: could you see him, you would think it absurd to take any pains for the sake of a creature so ridiculously small.

But always at sunset the infinitesimal soul of him awakens: then the room begins to fill with a delicate and ghostly music of indescribable sweetness - a thin, silvery rippling and trilling as of tiniest electric bells. As the darkness deepens, the sound becomes sweeter - sometimes swelling till the whole house seems to vibrate with the elfish resonance - sometimes thinning down into the faintest imaginable thread of a voice. But loud or low, it keeps a penetrating quality that is weird... All night the atomy thus sings: he ceases only when the temple bell proclaims the hour of dawn.

Now this tiny song is a song of love - vague love of the unseen and unknown. It is quite impossible that he should ever have seen or known, in this present existence of his. Not even his ancestors, for many generations back, could have known anything of the night-life of the fields, or the amorous value of song.

They were born of eggs hatched in a jar of clay, in the shop of some insect-merchant: and they dwelt thereafter only in cages. But he sings the song of his race as it was sung a myriad years ago, and as faultlessly as if he understood the exact significance of every note. Of course he did not learn the song. It is a song of organic memory - deep, dim memory of other quintillions of lives, when the ghost of him shrilled at night from the dewy grasses of the hills. Then that song brought him love - and death. He has forgotten all about death: but he remembers the love. And therefore he sings now - for the bride that will never come.

So that his longing is unconsciously retrospective: he cries to the dust of the past - he calls to the silence and the gods for the return of time... Human lovers do very much the same thing without knowing it. They call their illusion an Ideal: and their phantom of organic memory. The living present has very little to do with it... Perhaps this atom also has an ideal, or at least the rudiment of an ideal; but, in any event, the tiny desire must utter its plaint in vain.

The fault is not altogether mine. I had been warned that if the creature were mated, he would cease to sing and would speedily die. But night after night, the plaintive, sweet, unanswered trilling touched me like a reproach - became at last an obsession, an affliction, a torment of conscience; and I tried to buy a female. It was too late in the season; there were no more kusa-hibari for sale, - either males or females. The insect-merchant laughed and said, 'He ought to have died about the twentieth day of the ninth month.' (It was already the second day of the tenth month.) But the insect-merchant did not know that I have a good stove in my study, and keep the temperature at above 75 degrees F. Wherefore my grass-lark still sings at the close of the eleventh month, and I hope to keep him alive until the Period of Greatest Cold. However, the rest of his generation are probably dead: neither for love nor money could I now find him a mate. And were I to set him free in order that he might make the search for himself, he could not possibly live through a single night, even if fortunate enough to escape by day the multitude of his natural enemies in the garden - ants, centipedes, and ghastly earth-spiders.

Last evening - the twenty-ninth of the eleventh month - an odd feeling came to me as I sat at my desk: a sense of emptiness in the room. Then I became aware that my grass-lark was silent, contrary to his wont. I went to the silent cage, and found him lying dead beside a dried-up lump of egg-plant as gray and hard as a stone. Evidently he had not been fed for three or four days; but only the night before his death he had been singing wonderfully - so that I foolishly imagined him to be more than usually contented. My student, Aki, who loves insects, used to feed him; but Aki had gone into the country for a week's holiday, and the duty of caring for the grass-lark had devolved upon Hana, the housemaid. She is not sympathetic, Hana the housemaid. She says that she did not forget the mite - but there was no more eggplant, and she dutifully expressed contrition. But the fairy-music had stopped: and the stillness reproaches; and the room is cold, in spite of the stove.

Absurd!... I have made a good girl unhappy because of an insect half the size of a barley-grain! The quenching of that infinitesimal life troubled me more than I could have believed possible... Of course, the mere habit of thinking about a creature's wants - even the wants of a cricket - may create, by insensible degrees, an imaginative interest, an attachment of which one becomes conscious only when the relation is broken. Besides, I had felt so much, in the hush of the night, the charm of the delicate voice - telling of one minute existence dependent upon my will and selfish pleasure, as upon the favour of a god - telling me also that the atom of ghost in the tiny cage, and the atom of ghost within myself, were forever but one and the same in the deeps of the Vast of being... And then to think of the little creature hungering and thirsting, night after night and day after day, while the thoughts of his guardian deity were turned to the weaving of dreams! How bravely, nevertheless, he sang on to the very end - an atrocious end, for he had eaten his own legs!.. May the gods forgive us all - especially Hana the housemaid!

Yet, after all, to devour one's own legs for hunger is not the worst that can happen to a being cursed with the gift of song. There are human crickets who must eat their own hearts in order to sing.
Posted by cwango at 2:06 PM 1 comment: Links to this post